2012 DA14 is a near-Earth asteroid that will pass extremely close to the Earth by astronomical standards around February 15, 2013. At its closest, 2012 DA14 will pass nearer than the moon and likely within the orbits of some geosynchronous satellites. It was first discovered and observed less than a year ago, in February 2012.

The asteroid's semimajor axis is the same length Earth's, and it makes a trip around the sun every 366 days. To give you a sense of how similar the orbits are, below is a 2D representation in which the white circle represents 2012 DA14's orbit (via Asterank): 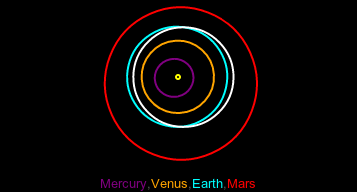 This graphic gives a good sense of the orbits from above, but doesn't show the difference between the plane of orbits of the asteroid and Earth. In the rendering below, the disk of Earth's orbit is gray; the yellow indicates the disk of DA14's orbit while it is above Earth's disk, and the blue indicates the orbit while it is below (courtesy of the Minor Planet Center).

Asterank is an asteroid database with a 3D rendering engine that accurately displays thousands of objects in our solar system and their orbits in a realtime simulation.

In preparation for the upcoming pass, I designated 2012 DA14 as a 'significant object' in the simulation, meaning you can follow its orbit around and see the near miss of Earth. Take a look at the 2012 DA14 lock-on view (requires WebGL).

Clicking above will take you to Earth (green/blue) on November 1st 2012, where the upcoming close pass of 2012 DA14 (red) is already apparent. Around February 15th, you can see the orbits nearly intersect.

This rendering of the pass is done in Cosmographia from the point of view of the asteroid itself:

Regardless of the uncertainty reported by media (and how close things look in the simulation), 2012 DA14 will not hit Earth in 2013. In fact, 2012 DA14 is not even classified as a Potentially Harmful Object (PHA) by the Minor Planet Center, the authority on minor planetary bodies in our solar system.

These visualizations exaggerate the scale of objects in space. Even at its closest, 2012 DA14 will require a powerful telescope to see in our night sky.

Scientists estimate the actual number of asteroids out there, accounting for undiscovered asteroids, could be more than 10 times the number currently known. In other words, our inner solar system is almost 1,000 times more crowded than depicted by the cloud of asteroids on Asterank.

As a disclaimer, the orbit of 2012 DA14 after its near pass in February is not predictable. The calculations used in the graphics and simulations above will not be accurate after the fact due to the effects of Earth's gravity on the orbit of the asteroid. However, observation by the Minor Planet Center and other astronomers will bring this information up-to-date.

For more, please see J.L. Galache's excellent write-up on the subject on the Minor Planet Center blog, Clearing Up The FUD on 2012 DA14.